Garnet crystals are said to have a variety of different meanings. For some people, they represent strength and courage. For others, they may be a symbol of hope and renewal. Regardless of what they mean to you, garnet crystals are said to be powerful stones that can help to promote positive change in your life. It is believed that garnet crystals can help to increase your self-confidence and motivation, while also promoting feelings of love and compassion. If you are looking for a way to add some positive energy into your life, consider carrying a garnet crystal with you or placing one in your home.

Garnet is a beautiful, rich red stone that has been used throughout history for a variety of purposes. For many people, garnet jewelry is simply a beautiful accessory. However, the garnet’s meaning goes much deeper than that. Garnet is said to represent love, passion, and creativity. It is also said to promote emotional balance and stability.

In addition, garnet is believed to have protective qualities. Some even say that it can help to guard against negative energies. Whether you believe in the power of crystals or not, there is no denying that garnet is a stunning and fascinating gemstone. 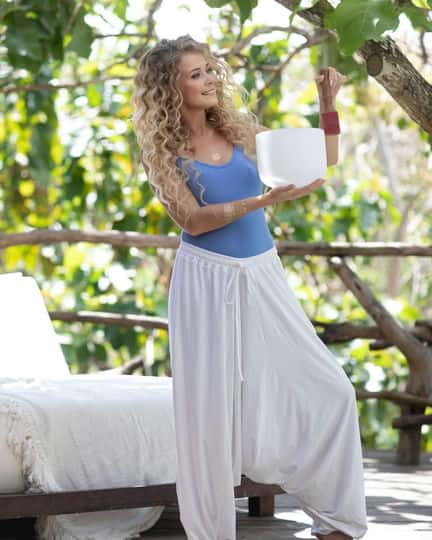 Researcher in spirituality and metaphysics dedicated to introducing people to their inner selves.  Author of five books on metaphysics, crystals and chakra balancing. Over 15 years of experience studying metaphysics, yoga teacher and reiki master.

Garnet stone is a glittering deep red crystal with the most mesmerizing glassy glow you will ever see. The crystal holds value for being one of the earliest crystals for spiritual protection known to the world. Besides, this bright red crystal is highly in demand in healing jewelry as well as the fashion world. It’s often confused with Rubies but obviously stands out for its healing powers. Work on your creative energy with this fiery crystal of passion. 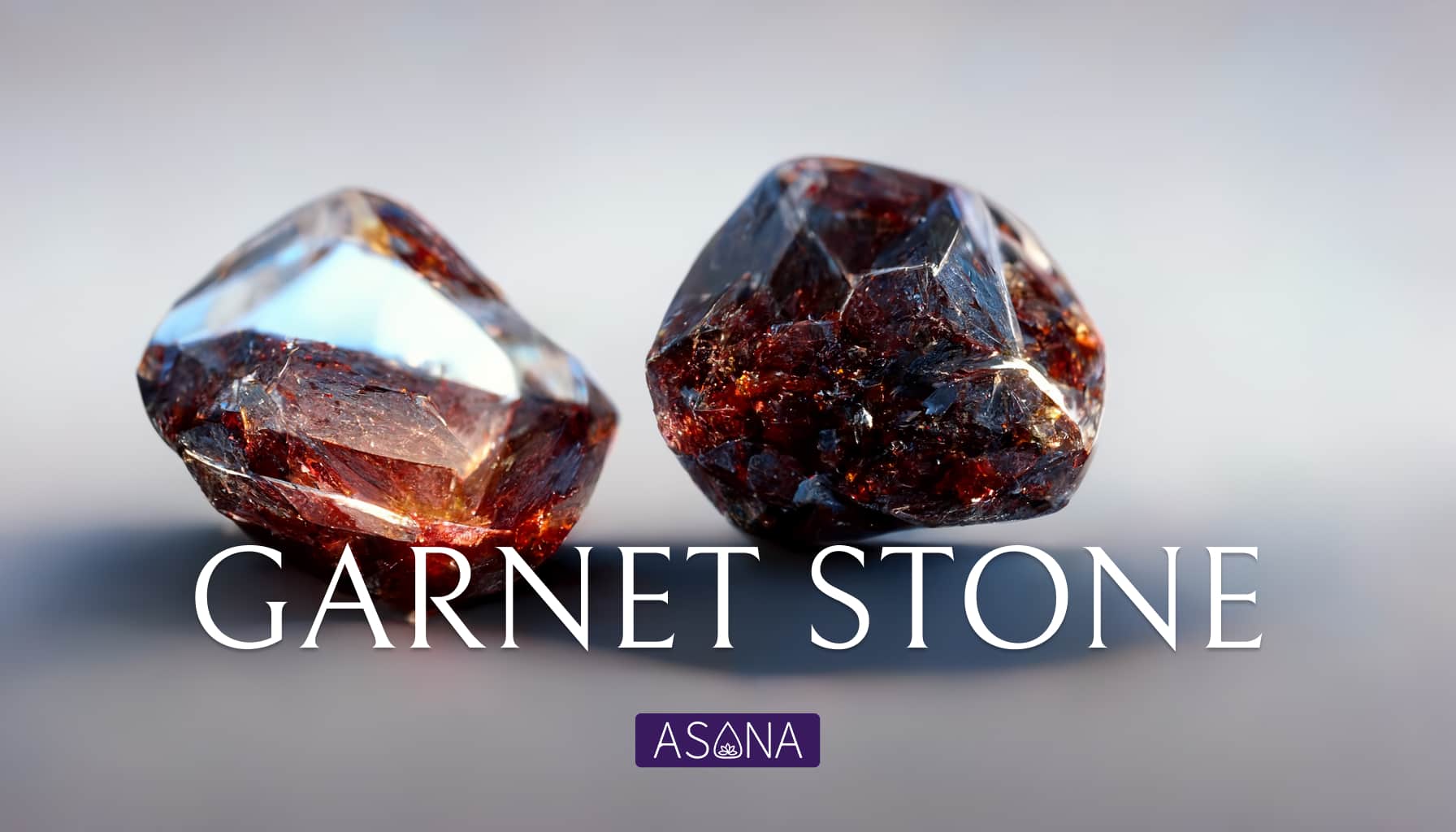 Garnet gemstone is a highly effective grounding stone that helps you reach your potential best. Moreover, it’s a stone that harnesses your sensuality producing strong and intense feelings. The crystal is believed to connect you to the powers of divinities i.e. Cupid, Venus, and Aphrodite. Working with this crystal symbolizes purity, perfection, and love. Besides, placing it under your pillow helps alleviate nightmares. It’s a stone of courage and a highly powerful talisman for protection. But what makes this reading more exciting is the lore behind this beautiful red gem. So, let’s dive in to learn something more about garnet meanings and powers.

Disclaimer: Gems & Crystals have been used for centuries as a guide in life and spiritual talismans in many cultures. They are believed to help us in an emotional and spiritual way.  But it is important to consult your doctor if you are experiencing serious medical problems. Crystals are not intended to diagnose, treat, cure or prevent any disease.

Jump To a Section Below 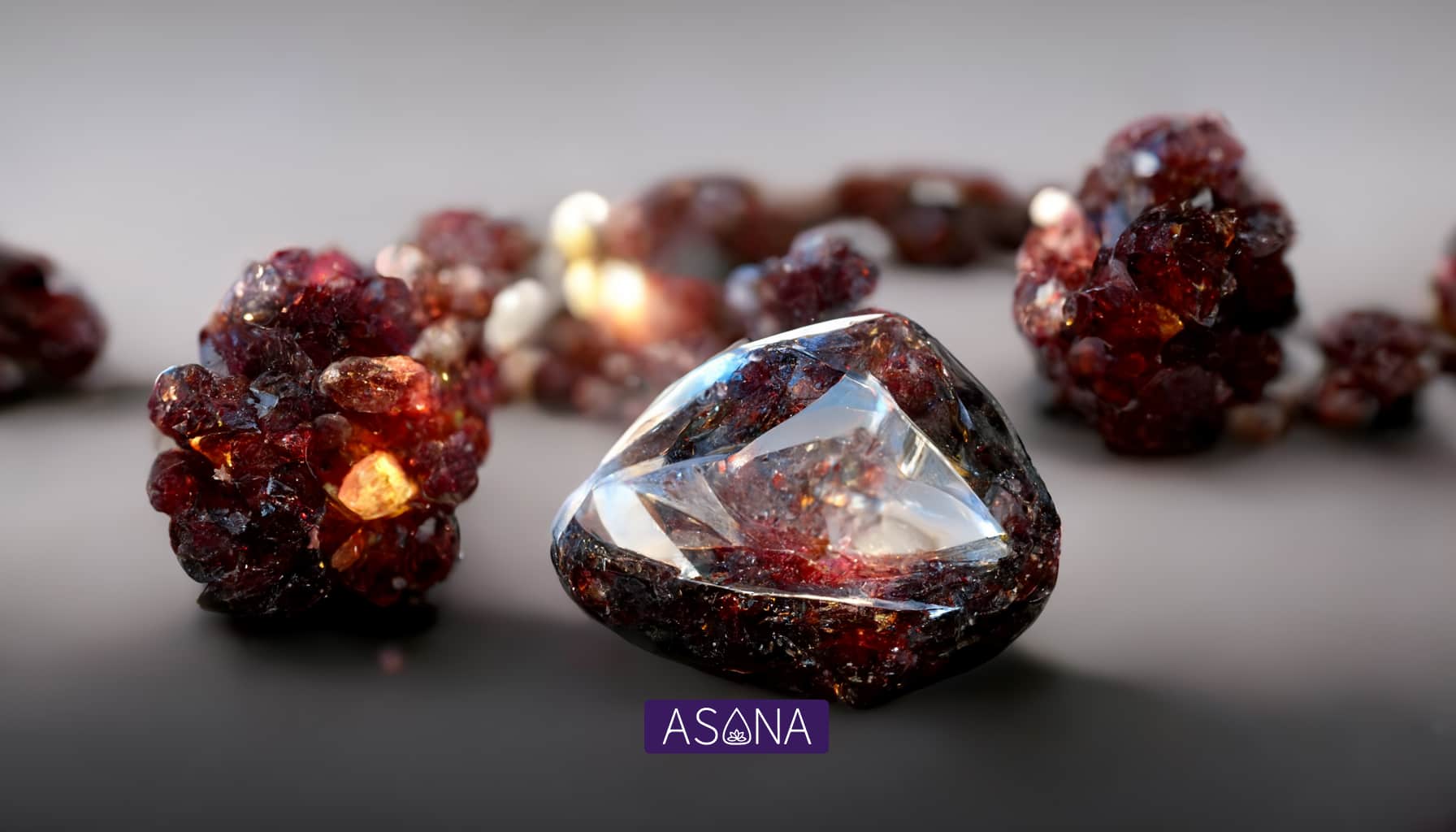 Garnet stone gets its name from the Latin word “Granatum” meaning pomegranate owing to its close resemblance with its shiny seeds. Passion, creativity, and fire truly define garnet meanings. Moreover, it’s a stone of willpower and strength. Wearing garnet jewelry symbolizes your loyalty and appreciation for your loved ones. It’s a stone brimming with energy that brings out passion, optimism, hope, and connection.

Formation of attraction, libido, and desire best explain garnet meanings and powers. Whenever we hear the word “Garnet”, the first thing that comes to mind is a wine-red crystal. But to your surprise, raw garnet occurs in almost all the colors a rainbow has. But these variations have got other names for convenience. So, the gleaming red crystal defines the true garnet meanings.

History witnesses great traditions and legends featuring garnet stone meaning. For a very long time in history, people used this crystal as a cure for anxiety, depression, and nightmares. Besides, they also believed that wearing a garnet stone helps alleviate liver-related problems as well as hemorrhage. Legend states that Noah employed a finely cut big glowing garnet stone to enlighten that ark during those wet and dark days and nights. 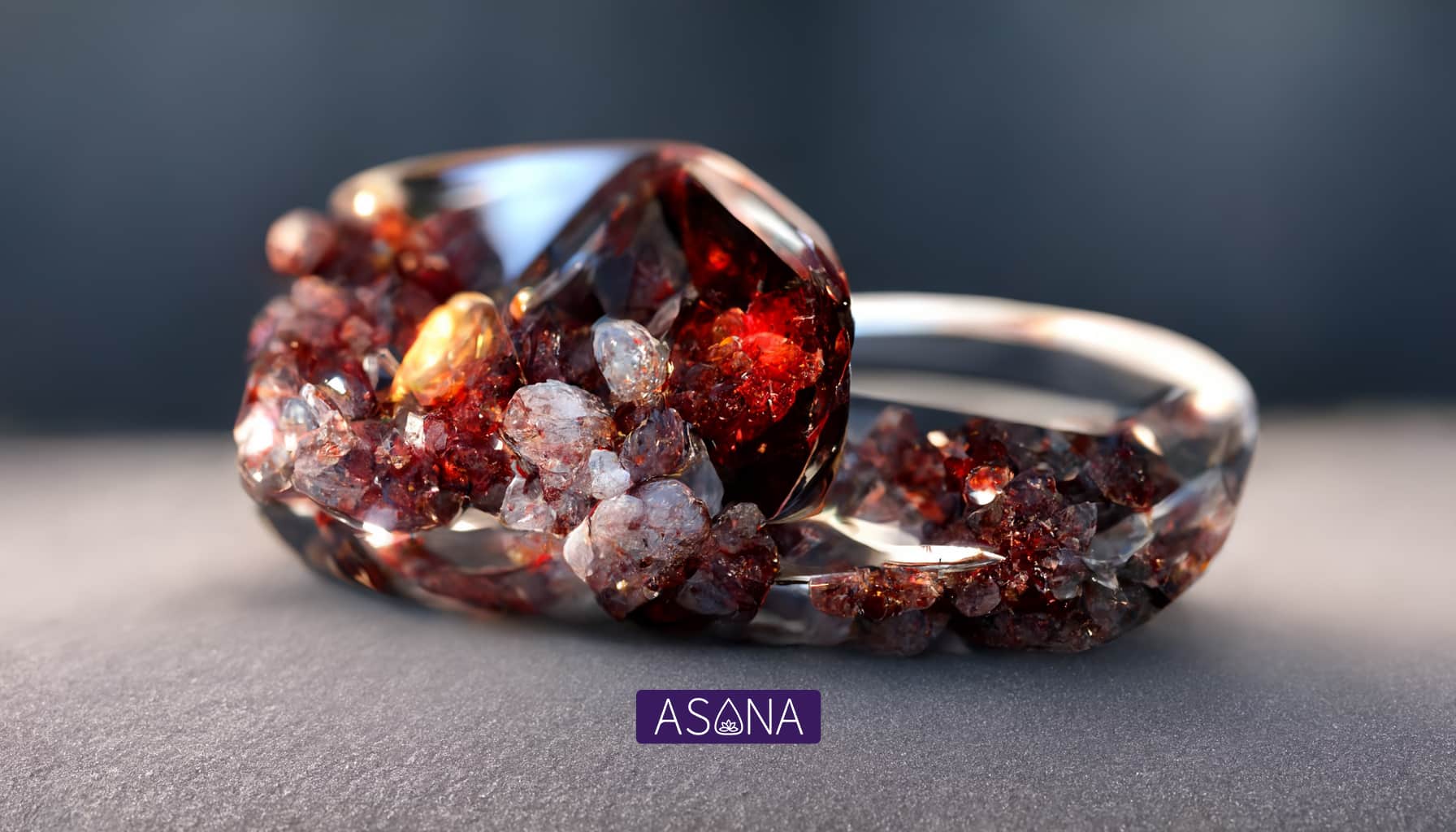 According to Hebrew, this bright red stone is one of the twelve gems of Aaron’s armor. In Islam, garnet holds importance as the gemstone to illuminate the fourth heaven of Muslims. Greeks believed that wearing this gemstone, guards from drowning and sea risk. Besides, legends highlight garnet birthstone potent against poisons.

Crystal healers believe that garnet stone is the perfect kick-start for your sexual prowess. No matter if you are having low libido or issues with physical intimacy, this deep red crystal is a great help. Revered as the powerful sex stone, garnet brings outbursts of energy, emotions, and intimacy. This passion stone helps you to feel satisfied and more involved in your relationship. 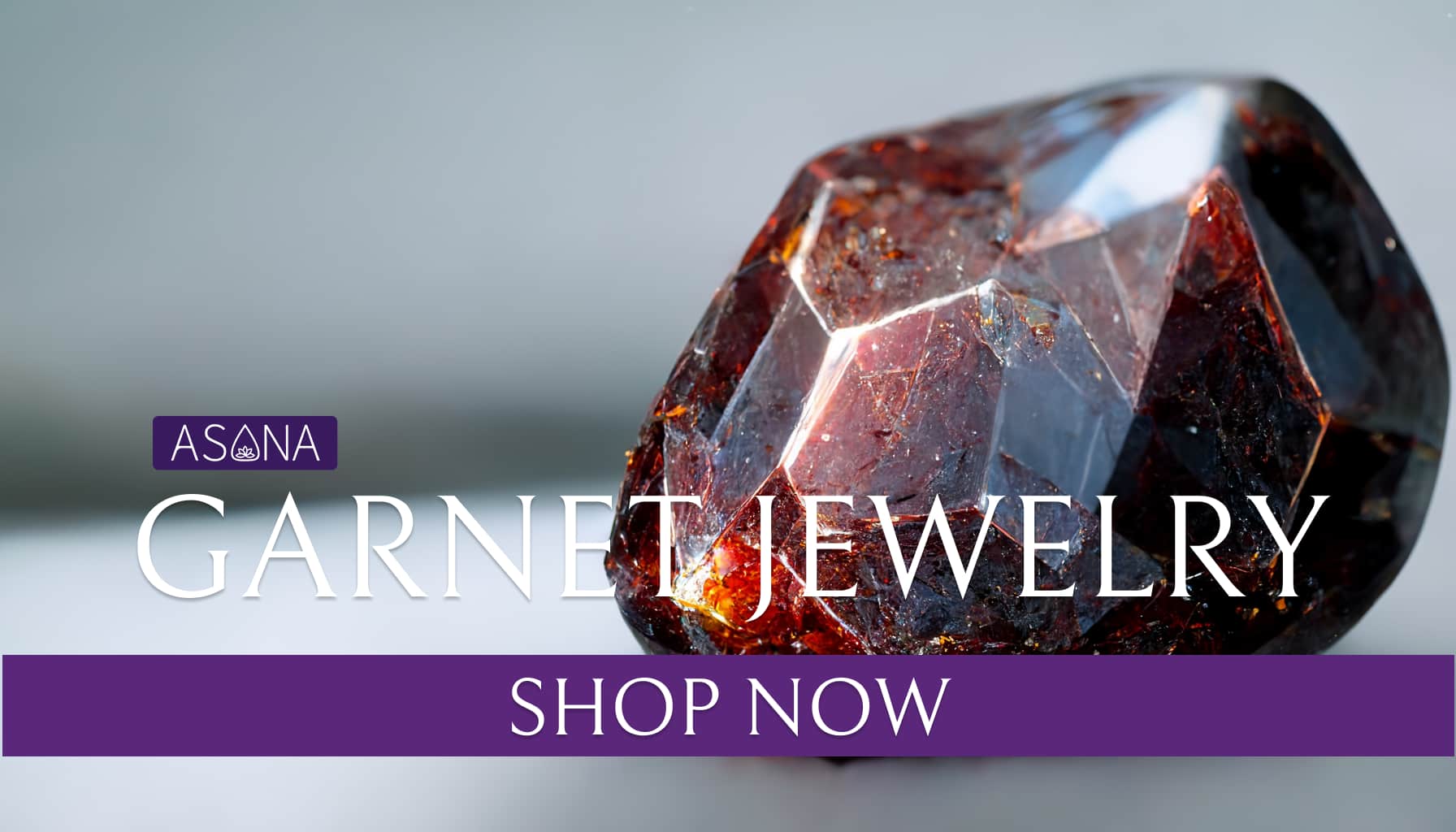 With a warm and rich blood color, the stone radiates with energy. Moreover, people believe that the stone helps flush out body toxins. Wearing garnet jewelry helps with blood circulation and boosts metabolism. Let your body work the best of its ability with the help of this amazing stone. Importantly, crystal healers believe that the stone helps your body to better absorb essential nutrients. Hence, Garnet is the go-to crystal that inspires you to live from your heart, living your best life.

Garnet is known as the Stone of commitment. It’s a glorious gem that has long been celebrated as the ideal gift for newlyweds. When it comes to saving relationships, the crystal cleanses all the concerns and envious feelings. Besides, whenever in doubt, seek help by meditating with Garnet gemstone. It’s a highly uplifting stone that supports and nurtures your soul with its deep healing. 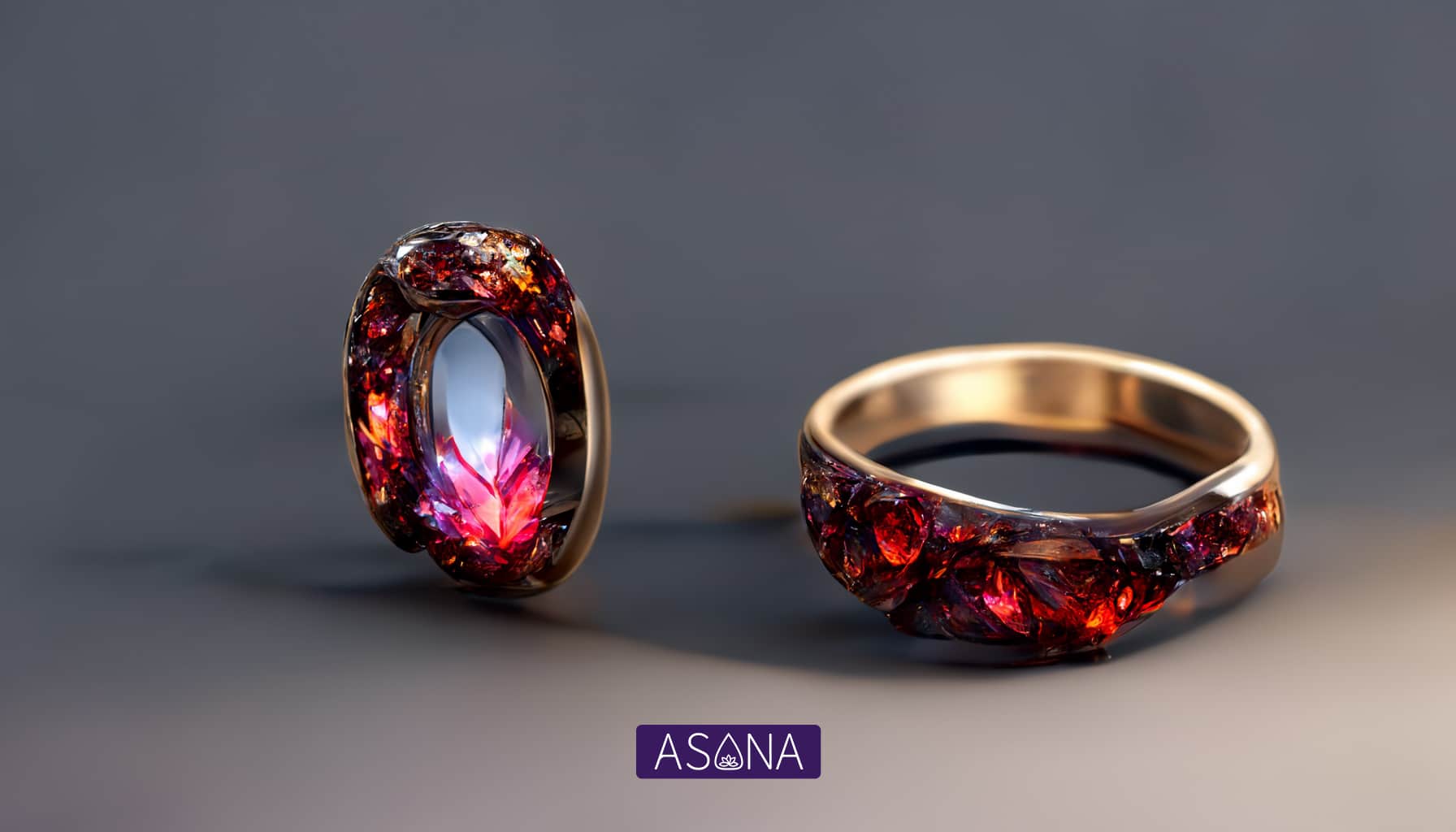 Moreover, for those who want to acquire balance in life, garnet is definitely your stone. It’s a powerful talisman for protection, especially when having emotional trauma.

The deep red crystal keeps you off the emotional roller-coaster by helping you make better choices. It also polishes your internal confidence and helps you portray a more optimistic image of life. Furthermore, if you often find yourself submerged in reservations, garnet is your stone to talk to. The stone strengthens your survival instincts and assures you that you are well-equipped to handle them.

The best spiritual gift that you can expect from Garnet is the grounding force that we all desire to have. The root chakra is verily the most important chakra that helps us feel safe and connected to the universe. So, this secure feeling helps us make healthy decisions that impact our authentic well-being in society. Moreover, the stone is believed to strengthen our sacral chakra that is the base of our potential and creativity. To your surprise, the stone also buttresses the heart chakra. Trust, compassion and loyalty are something that relates to garnet meaning. It’s time to stir up your vital energy and let it flow across all your chakras. This deep red crystal is a charm for the amazing passion that builds a stronger inner you.

Garnet birthstone is officially for those born in January i.e. the Aquarians. But it also has praiseworthy healing benefits for those with the star sign Aries, Leo, and Virgo. In Greek mythology, the garnet birthstone is a symbol of love and eternity. Still cherished as the crystal for infinite love, it’s a traditional 19th-anniversary gift. Besides, for those looking for a mindful gift idea for their 2nd or 6th anniversary, Garnet jewelry is definitely the best option. Essentially anyone can turn to this fiery red crystal as a source of guiding light. 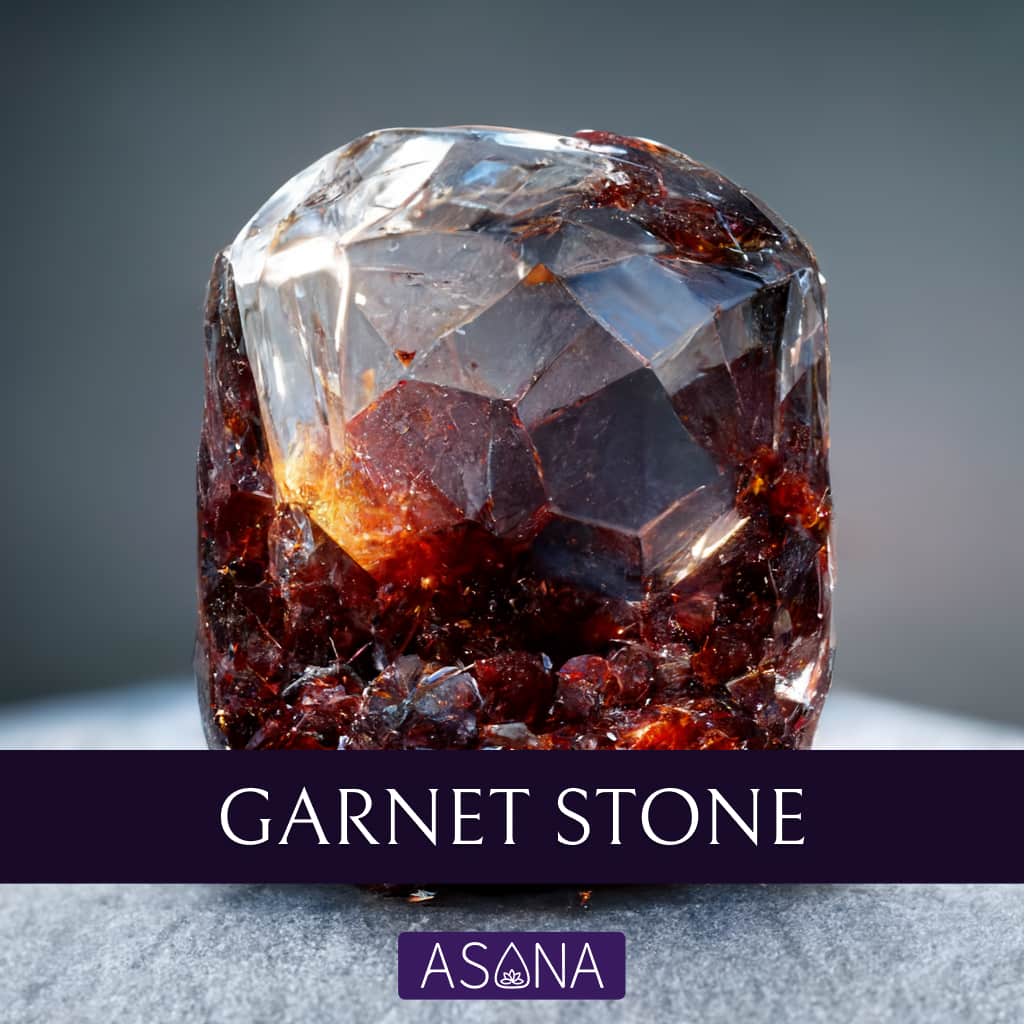 As a sun sign, the stone brings the radiance of hope and connection in your life. The Garnet birthstone symbolizes strength and bossy attitude for the star signs Aries and Aquarius. Meditating with garnet birthstone is an incredible booster for self-love for the Aquarians. Moreover, it also develops passion, strength, and courage for the Star sign Leo. Be fearless, passionate, and sensual when you have the healing of the garnet birthstone in your life. Be fearless in your decisions and life choices when you have nature’s power in the form of garnet with you.